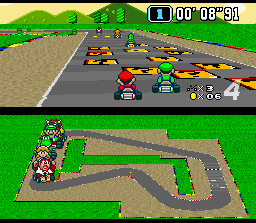 Mode 7 enables gamemakers to add a 3D effect onto their games. A texture map is put on some sort of flat surface that can be rotated, zoomed in and out of, etc. It's main use is for effect, although it can be used for other purposes. There is yet to be a game that uses it to it's fullest extent.

Super Mario Kart is a good example of how Mode 7 games look like.

Technically, Mode 7 cannot be fully implemented into a fangame making utility, as the actual device we know as Mode 7 was exclusive to Super Nintendo, and later the Gameboy Advance hardware. Using the advanced Super Famicom hardware, it became possible to apply a certain image to a direction, and then allowing a pseudo 3D image to be scaled, and rotated. Many early PC games use a "Mode 7" effect, most noteably the MS-DOS classic "Wacky Wheels". While there is an alleged 'Mode 7' extension for MMF, it is simply a primitive form of texture mapping; not the same exact effect used in games like Secret of Mana, and F-Zero. It finds little use in Multimedia Fusion, as it tends to give low framerates and does not allow easy use of collision detection.