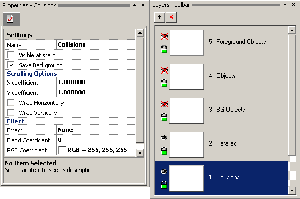 Layer toolbar and the selected layer's properties box. This is the hardware acceleration beta of MMF, as evidenced by the layer effect options.

Layers are a feature introduced in MMF2 and TGF2, and are similar in concept to layers used in programs like Photoshop. Layers offer many options, such as the ability to wrap and to move at a different speed than the camera, allowing for parallax effects. They even allow backdrops to appear over active objects, something previously impossible. All objects and backdrops on a layer appear over objects and backdrops on layers below. Note that some objects, namely Windows controls like edit boxes and the like, always appear on top of other object no matter what layer they are on.

MMF1.5's Layer Object was updated for MMF2 to add new functionality for the new layer system, and allows layers to be hidden or shown at runtime, along with allowing changes to their position and scrolling coefficients. Objects can also be moved to different layers.

Objects can only collide with other objects or backgrounds on the same layer. An object's Z-order does not affect what layer it's on.

Layers in software mode can slow down the game if used in excess; this is especially true if filter effects or alpha transparency are being used on objects.

Hardware mode benefits the layer system greatly; layers cause negligible slowdown in hardware mode. They also get more visual options; they can use shaders, which affect all non-transparent areas of the layer (including objects and text), and they can also be made semitransparent.