Baby Yoshi1000 is a late 09 user with a mushroom reference. He originally came from SMW Central, but he soon migrated over to MFGG. He frequents the General Chat, Fan Art, and Doodles board, occasionally posting up his own work. He began the "MFGG Comix" fad when he posted a rather trashy ("That's the joke") looking comic, which spawned multiple parodies.

Baby Yoshi1000 comes from Canada, where he currently resides. Not only this, but he is also a "graphics designer" for his school.

Though he is not popular with MFGGers in general, with them thinking he is a troll, he above all shares a rivalry with Sigma, whom he often refers to in his work (i.e. on his custom Pokemon card, his weakness was "Sigma"). Sigma himself does not think highly of Baby Yoshi1000, but often joins in with his jokes in a possibly failed attempt to be funny. He claims he's better than Cy at drawing, but that's been proven to be false. He also has a pretty good friendship with DARK BLOOM 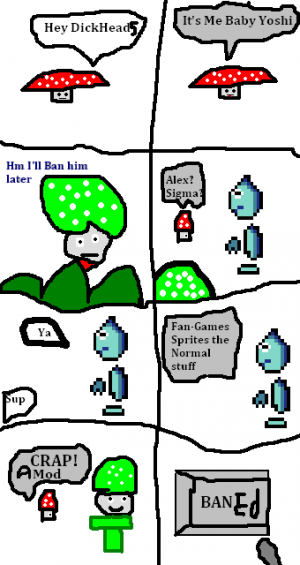 The comic that started it all

MFGG Comix was a quick lived fad started by Baby Yoshi1000. Originally posted in the Doodles board, he has admitted to not putting any effort into it. Regardless, its many spoofs have given the little doodle a short-fad spike that mostly consisted of people drawing their own interpretations of what happened.

It involves BabyYoshi1000 introducing himself, while Jazz watches on spitefully. He then greets Alex and Sigma. Sigma, however, is not actually there, so it will forever remain a mystery as to why he sees Sigma as well. Alex claims he is working on fangames and sprites, it being "the normal stuff" (though Alex did not start spriting regularly until after the comic was published). Jazz then appears from a pipe and bans BabyYoshi (strangely, he pushes a button reading "BAN ED"). The comic then ends abruptly.

Baby Yoshi1000 has made a second comic, but Mecha the Slag shut it down before it could continue to avoid drama. He has also issued a warn threat for anyone who continues the fad, meaning that this fad has been officially killed off for good.

Here is the list of spoofs in chronological order.

Shaq Fu's BBYoshi: Behind the Comix

LocoRoo's "An Excuse To Draw My Ref"