Yoshi Gone MFGG is a scrapped Yoshi fangame, that had a demo released in 2002 by a 12-year-old Yoshiman and one of MFGG's earliest games.

Yoshiman was enthralled with the MFGG libs at the time, and wanted to use them to their fullest extent. The best way to do this, in his mind, was to literally throw a Mario character (his favourite at the time being Yoshi) into several levels filled with these library graphics. Thus, the plot and motivation for the entire game was made.

Being an extremely early-era The Games Factory game, Yoshi Gone MFGG has a great many glitches and an unpolished design, making the game nearly unplayable. As such, it consistently receives very low review scores from modern players, generally 1~2 out of 10. 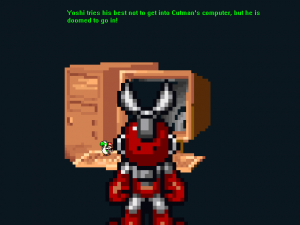 Yoshi tries his best not to get into Cutman's computer, but he is doomed to go in!

Along with Cutmanmike, Yoshi will need to defeat Neo Hyper Yoshi and many other members of MFGG to escape from the dreaded TGF lib files completely.

It was "planned" for Yoshi to also battle Yoshiman himself, but his level was never completed. It can still be accessed with its password, but there is little to do there.

However, some modifications have been made:

On one occasion, Yoshi will turn into "Doom Yoshi" (whose graphic was taken from a related lib he was in). Pressing Ctrl will give Doom Yoshi a burst of speed. The player must eliminate the enemies by running into them at maximum speed. Doom Yoshi will then return to regular Yoshi and may proceed with another platform segment after all enemies have been defeated in this manner.

Yoshi is also able to grab ledges, but this at no point ever becomes a factor in gameplay.

To use these, select Password from the title bar menu and input the text exactly in the given field.

In addition to the existing flaws within the TGF Platform Movement: