Wash your hands man orginally spawned from Planet Megaman, After its downfall he became a mod at the mess of a place called "megaman community." He was fired because he was too cool. Wash your hands man enjoys mind altering substances, drawing disturbing images, and escipades with women.

Not a whole lot quite frankly, besides his well-animated Flash series, and his creepy drawings. And unusual comics. Most notably "the adventures of normal man." all of witch can be viewed here-[1] 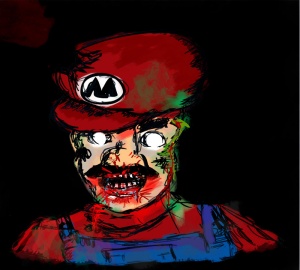 An example of Wash your hands man's handywork

Wash your hands man The character.

Wash your hands man was created many years ago in complete bordem while the artist was living alone in a rual village in Alaska. Over the years the charater has evloved from a megaman re-clouor to a disturbing rendition of the artists subconscious desires. As his name implies, he likes to wash his hands, alot.

Shoot a man just to watch him die.