VinnyVideo has made three different games for previous Secret Santa events. All of them are fairly short, which is why they've been combined into a single article.

Vinny made this for Mit in 2013. It's a takeoff on Mit's game, Luigi Takes a Walk. However, it has a happier ending - Mit goes to the mailbox and receives a Christmas card from Vinny. 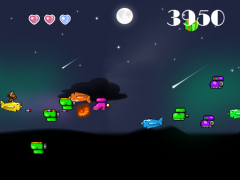 Gameplay from A Very Roushi Christmas.

This was Vinny's gift for Hypernova in 2014. Of all of Vinny's Secret Santa games, this one has the most substantial gameplay. In this game, Hypernova's character Roushi pilots a plane while collecting presents and avoiding (or shooting missiles at) the various enemies. Many of these enemies are shoe-based, since Roushi apparently has a distaste for footwear.

Vinny's most recent Secret Santa game was for SuperArthurBros in 2015. This is a one-level Hotel Mario fangame starring Link. It also includes some cutscenes inspired by the CD-i games (both Hotel Mario and the CD-i Zeldas, later made famous in YTPs). It's rumored that John Cena also makes an appearance in this game, which is not certified meme-free.