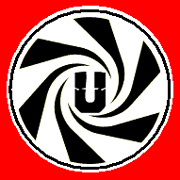 The Ultimate Team (Commonly referred to as TUT) were a group of members established in the first Team Wars, along with Team Wut. The team's leadership was shared by Biddy and Bungalo.

The Ultimate Team's logo is a take off of the World War Two Nazi symbol, however changed slightly to involve more 'rounded' points, and a 'U' in the middle. It still shares roughly the same color scheme.

The Ultimate Team tend to be regarded as the winners of the Team Wars, as most people who were part of it were already long-time members of MFGG, however in the second team war, ordinary members were recruited for the ultimate army.