The Paper Mario Chronicles is an upcoming animated fan series created by E-Man.

Seasons and their Synopses

As of now, only three seasons are planned for this production. Each season is planned as a different story arc.

Back in either 2007 or 2008, E-Man wanted to make a Paper Mario comic on Smack Jeeves since he liked the series' art style and the games were a major influence on him. His first attempt was a Kingdom Hearts web comic where the book containing the 100 Acer Woods merged with the other Disney Worlds to turn them paper-thin. Besides a couple of pages that each showcased Sora drawn in a less than impressive style, the project never went very far. It wasn't until 2008 when the project was revived in a different form. After creating a few Paper Mario-styled puppets for a school project, E-Man originally intended to try a second attempt at a Paper Mario comic; however, remembering that he purchased Anime Studio 5 a few months ago, he decided to convert the project into an animated series instead. 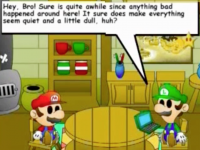 A screenshot from the first version of this project.

At first, E-Man started off with a series of tests to explore the boundaries of the software and himself, but by the end of 2008, he produced the first episode of the Paper Mario Chronicles. While the animation and graphics were good by web animation standards at the time (especially since it was currently the only Paper Mario animation on YouTube with decent quality and matches the style of the game without ripped assets), the episode was filled with flaws. Without any voice acting, the dialog is found in speech bubbles instead that require the user to pause in order to read them in time. The music was nothing more than MIDIs from VG Music instead of actual music from the game. As for the graphics, besides the fact that they are shaded using simple gradients and hardly contained any actual 3-D effects, they look badly off-model due to E-Man using the same base for several key characters. In spite of this, the first episode received a mostly positive reception and E-Man was in the middle of starting the next episode. Unfortunately, progress was halted for work on a completely original short using the same style as his Paper Mario animations at the time, "Artster." Since the short won an honorable mention at an art show in 2009 and it was an original property, E-Man was determined to convert it into an animated series. He got as far as making another short in 2010, "Artser's Christmas Card," but no new shorts were developed since. The reason could be that E-Man wanted the Artster series to not be cutout to improve its originality and quality; however, this would require a lot more time and energy. Over the next few years, neither Artster or any Paper Mario-styled animations were under production.

Starting in late March of 2012, E-Man enrolled in the online version of the Florida-based multimedia college, Full Sail. Over the next three years, E-Man was busy refining his animation skills in order to get a career in that particular field. After learning a fair amount about Maya from his studies, the idea of reviving his Paper Mario project popped into his head in the autumn of 2014. Originally putting off the progress for it until the spoilers tabs on the VG Resource started working again, E-Man spent three days creating a quick short in Maya that was finally finished on October 17th, 2014. Compared to his previous Paper Mario experiments, it was actually 3-D and used assets ripped from the first game. Not only was the test met with a positive reception, but it also accurately matched E-Man's original vision of the project that Anime Studio was unable to provide. As the result of these two factors, E-Man spent the next several months on and off producing a custom Mario puppet. Unlike the crude one used in the original short, it looked significantly better due to E-Man's improved art skills and it had more sophisticated controls. The puppet was finally finished on March 2nd, 2015, and E-Man created another test short using this puppet over the course of two months. On first of May of that same year, it was finally finished and met with a solid amount of praise.

While E-Man was originally going to work on his new series right after the second Paper Mario test was finished, he thought a smarter idea was to work on a less ambitious Paper Mario short as a means of "testing the water." Currently, most of E-Man's energy is devoted to The Koopa Bros.: Back in Action, but he thinks that after this short premieres, he'll receive enough support to accelerate the development of his main series. He also plans to start another Paper Mairo series, the E-Man and Doopliss Interview Show, at the same time as this event.

Influences on the Project

As stated by E-Man, the Paper Mario Chronicles is the collective product of his talents, interests, and experiences.

Ever since his early days, E-Man has always been creating stories based on video game characters in his head. This project is an extension and physical manifestation of that activity. His love for telling complex story arcs came from several web comics on the internet, such as Zelda Comic, GameCheetz, and Two Evil Scientists. The Mario fan site, Lemmy's Land, not only contribute to this appreciation for story arcs, but it also inspired E-Man to create elaborate backstories and alternate versions for already existing characters. Of course, his experiences with creating his own fan fictions and web comics helped shape the animated series.

Besides Disney and Kingdom Hearts, another core inspiration for the series comes from Flash movies on Newgrounds. For a time, E-Man originally wanted to create his own sprite series that would be his own answer to the popular Flash series, Rise of the Mushroom Kingdom. Not only did he want his series to have darker undertones like its inspiration, but he also wanted to supply plenty of interesting plot twists and smaller story arcs. Of course, the biggest influence from Newgrounds is another popular series, Super Mario Bros. Z; however, this Mario fan project influenced E-Man's series in a way normally unexpected. Frustrated by the amount of fans trying to imitate this series and its success, such as King Asylus with his Super Mario Bros. - Heroes of the Stars series, E-Man thought the best way to counter that is to make his own series a subversion of Super Mario Bros. Z. As a result, the Paper Mario Chronicles is planned to use no jokes and ideas from that series and leave out anything similar to Dragon Ball Z. Also, since he is annoyed by some of the ideas used by the creator of Super Mario Bros. Z, such as Peach remaining as a dimwitted damsel and Bowser as a ruthless villain, E-Man plans to subvert those ideas.

Of course, what serves as possibly the biggest subversion in the Paper Mario Chronicles is E-Man's decision to use custom assets over ones ripped from the actual games. The key reasons are that the assets that exist already lack the quality E-Man had in mind and how he wishes to to feel indebted to the users who ripped them (especially if they are users E-Man deems as unsavory and have a low opinion of him). Also, due to the staggering amount of fan works using sprites from the Mario & Luigi series (a sprite style E-Man has a love/hate relationship with), E-Man thought that making the assets from scratch will help his series stand out.

The reception for the reboot of this project is generally positive. Even though there are only a couple of test shorts and several incomplete puppets, nearly anyone who has seen E-Man's work is genuinely impressed. The only truly negative reception E-Man has received was from one of the animators from Screw Attack's Death Battle series. He mentioned that the Mario puppet is off-model and the animations are sluggish and weak.

Project thread on the VG Resource

E-Man's Tumblr blog that showcases progress for the series

The first episode of the original Paper Mario Chronicles