Syaxamaphone is a well known member of MFGG, despite not having been around for very long. She joined the MFGG Mainsite of December 2nd, 2014, but joined the Message Boards on November 26, 2014. She has not produced a large amount of content on either site, but is an active viewer and commenter. Her work can be found on her website, Suits & Sandals. Syaxamaphone's most recent big game is Khimera: Destroy All Monster Girls, which is avaliable for download on Steam.

Syx debuted into the game making scene in 2001 and since then she has made several games, both original and fan titles. Many of her earlier projects are no longer publically available but her more recent titles developed under the Suits & Sandals name can be found on her website to download for free. Syx performs the bulk of her work in Game Maker but also has experience in other programming languages and tools, such as RPG Maker and Java.

Due to the Syx's secretive nature, little information is available on current projects. Syx usually posts tidbits of information and screenshots via Tumblr or the MFGG forum's WIP topic. Syaxamaphone is currently focusing on War Girl, with help from Mit and Doc. 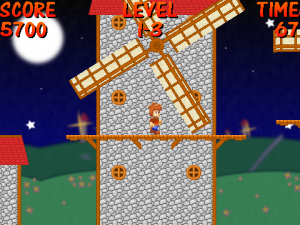 A screenshot from Mandew vs the Upside Down Machine