Super Mario Theta is a fangame in production by Mario Gamer and Yoshiman. It is their first attempt at a traditional Mario game, a departure from their usual mini-games. It has been in production since late 2006 and was unveiled at the 2007 Nintendo Community Fangame Convention. It again reappeared at the 2008 Nintendo Community Fangame Convention, this time with a demo. The game's details have been under tight wraps since production began to protect interest, one of the reasons Mario Kart: Beanbean Circuit failed.

The plot revolves around Bowser obtaining possession of the Theta wand, a device that is powered by the nine colors of the world. Their balance is upset when the wand is stolen, and used to attack the Mushroom Kingdom. This leaves a new unheard of destruction in it's path. Mario arrives just in time to be "decolorized" himself and wakes up in a weird dimension between worlds...

Super Mario Theta is based off of a traditional Mario side-scroller. The game will be laid out in a semi-linear format, with levels being unlocked after the previous is completed. However the game will also be set up like a 3D adventure and feature a hub world, with free roaming. 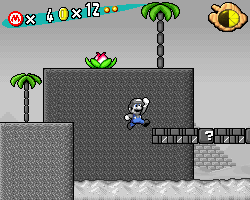 The game came to shape throughout the later half of 2006, when Mario Gamer began toying with the idea of a traditional Mario game. Throughout the next year the game's levels and concepts were written out and Yoshiman signed on to help with the game. On July 22, a website was launched with the first teaser for the game. Throughout the next few weeks an ad campaign began, each week with a new message; SOAR AT THE UMPIRE, AM I PEAS OR THE RUT, I STARE THE ROAM UP, I HATE MA ROT PURSE. In the end the title finally appeared as Super Mario Theta and all other messages were revealed to be anagrams of the title. The game was officially announced with a trailer at the 2007 Nintendo Community Fangame Convention.

The game was quiet for some time until an engine test was released on December 31st. The test included Mario in a completely empty gray Peach's castle, complete with a main foyer, the back hallway and the courtyard. All other doors were locked. This has since been Revealed as the game's main hub, ala Super Mario 64.

On April 1st, 2008 it was revealed the game was "complete" and was submitted to the main site. Shadowman was the brains behind this and collected a short description and screens from Mario Gamer and Yoshiman. The description claimed the game had dropped both the grayscale color look and featured 58 levels in 12 worlds, all of which is not true. The actual game launched a program that covered the entire screen in a black hole. Needless to say, it was a joke.

On July 5th, 2008, Super Mario Theta's next advertisement campaign was revealed. A banner with Mario staring over a world fading from color to black and white was revealed every two weeks. Each banner featured a new level, several of which were previously unseen. Under the banner the text, Everything is about to change. was posted. This campaign led up to the release of the first offical demo on October 21st at the launch of the 2008 Nintendo Community Fangame Convention.

Since the demo's unveiling, the project has been majorly quiet. The creative team took a break for a multitude of reasons. They were originally due to return to work on it, but the loss of contact with Mario Gamer led to a cancellation, and the files being left on DJ Yoshiman's hard drive.