Super Mario - Turd Feast is a series of joke games made by Supernova using Game Maker. The games draw much of their inspiration from the Waligie series. 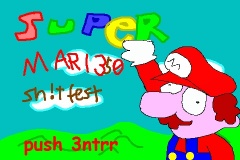 The first installment of the series was released on May 22, 2013. Supernova made it when he was bored.

President Obama took the Mario Bros' Purple Coin. Mario and Luigi rode taxis and shot pigeons. After all the pigeons are gone, the taxi crashed into an iPhone and caused a forest fire. Mario found a flying water bucket and stopped the fire with it. This action enraged Smoky the Bear, and Mario defeated him by shooting Hello's logo.

Meanwhile, in the Oval Office, President Obama found out the Bros tried to get the stolen coin back, so he asked former President Bush to stop them. Bush launches a nuclear missile at the Bros and Luigi destroyed the rocket. Obama thinks Bush failed him, so he killed Bush by sending out his Hope poster in slow motion. After that, Obama escapes to planet Jupiter.

The Bros move across the desert to Mexico so they can get a cheap space flight while avoiding giant cockroaches and border patrols. After dodging tons of space meatballs, the Bros encounter Team Lander (space version of Team Rocket) and defeated them with the help of the cursor. As the Bros encounter Obama, Miles' cousin Kilometers stopped them, urging the bros not to take the purple coin. But the Bros defeated him right away.

When the Bros came to meet Obama, Obama refused to surrender and transformed into a ninja. After a tough battle with ninja Obama, the bros reacquired the purple coin, and planet Jupiter self-destructed. 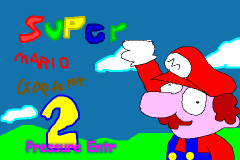 Previously on Turd Feast 1, the Mario Bros escaped planet Jupiter with flying ducks and ninja stars. After they escaped, Black Pirate With Beard took the purple coin and left Lyon (from Fire Emblem as a lion) to fight the Mario bros. Mario defeated Lyon by tossing veggies at him.

Team Lander returns soon after the battle claiming the made a 99¢ toaster out of Meowth. Team Lander defeated by the mouse and crash landed into planet Mercury turning into mercury.

Mario bros went back to planet Earth and search the pirate. The pirate made a plot to use purple coin and get watermelon and grape sodas while shipping tacos to the soda company to prevent bankruptcy. Luigi destroyed Black Pirate With Beard's plot by sending taco legally to America. Enraged, the pirate challenged Mario bros for a dance brawl. The Mario bros won the dance and regained the purple coin back, until a Chinese hacker hacked into the coin and took it.

In China, purple coin escapes from giant ninja collector until he ran into hippie Wario. Hippie Wario challenged Mario bros for a food ninja minigame. Mario bros defeated hippie Wario and got the coin back once again. Except hippie Wario exploded into million pieces.

In early 2014, Supernova created a third installment of the Turd Feast series. This installment has actual gameplay and better game quality like what Mushroom Pancakes did for the quality. Supernova claimed that this installment is the final one of the series, although it later turned out that the statement was a lie, when Supernova announced a fourth installment on July 7, 2016.

While the bros live in peace with the purple coin, Toad came and told the bros there's an important meeting from Peach. During the meeting, Peach and many Senators asked the bros to stop dictator of Yoshi's Island: Loushi (Roushi's more evil cousin) from harvesting Trollep-cheep for adult toys and shoes. The bros sent purple coin (as a ninja) and stopped Loushi. When Loushi is defeated, all of the government collapsed (so did the government properties).

Suddenly Hobo Obama came and tries to scam the bros for change. The bros refuses to give Obama change, this caused Obama raged up and become the new dictator of Yoshi's Island. While some republicans tries to claim Obama's power, they all got defeated by Obama's dictator power. Obama kidnapped Professor E. Gadd and force him to make Obama Death Star and robot minions. Obama used his cyber troops to attack Bowser's Kingdom, turning Bowser into a cyborg by the help of Dr. Wily.

When Bowser is a cyborg, dark cloud start to appear and scare many residents. In fact these clouds do no effect on anything. While everyone living in chaos, Luigi was bored so he decides to take a short walk consists of 10,000 miles. While Luigi was taking his walk, Obese Hippie Wario is pissed because how much fat Luigi burnt. So Wario challenges Luigi for a dance duel, but ultimately defeated (exploded into million pieces) by Luigi. After Luigi defeated the Nazi Speed Racer, Luigi meet Oracle Waluigi, who told Luigi to turn Cyborg Bowser into an umbrella. After Luigi turns Cyborg Bowser into an umbrella, Obama weakens.

When Mario reaches Obama, Obama turned into a ninja and have a final battle with Mario. After Mario defeated Obama and destroyed his Death Star, Giant Ninja Collector (mentioned in Turd Feast 2 that he will be back) interrupt the ending scene and challenges Mario for taco eating competition. Mario ate more tacos than Giant Ninja Collector that the ninja collector exploded. The bros and the purple coin lived happily ever after.

The fourth installment of the Turd Feast series, which is simply named as Super Mario - Turd Feast 4, was released by Supernova on August 19, 2016. Super Mario - Turd Feast 4 had received a mostly negative reception, with complaints mostly directed at the unfair difficultly and humor. Because of this, Supernova requested the game to be deleted off the main site. The game's forum topic was deleted on August 20, and then the game was deleted off the main site a day later.

Supernova submitted an improved version of the game to the main site on September 9. Changes made to the game include easier level design, better spelling and grammar, new title screen, and a survival minigame, which requires 20 rings to be paid in order to be played.

Super Mario - Turd Feast 4 begins with Donald Trump becoming the president of the Mushroom Kingdom. He built a wall between the Mushroom Kingdom and the Beanbean Kingdom, and stole the Mario Bros' purple coin. The Mario Bros decided to go meet Oracle Waluigi, and see if he knows any way to get to Donald Trump. They got to him by going through a generic grassland level.

Oracle Waluigi told the Mario Bros about that they will need about five (not seven, as Kim Jong Un ate the other two) Dragon Balls in order to get to Donald Trump. One way to get these five Dragon Balls is to use a flying pizza, which can be found in Obese Hippie Wario's heavily-guarded castle. Luigi decided to go inside the castle and find the flying pizza. After getting through the castle's security, Luigi meets Obese Hippie Wario. Luigi asked Obese Hippie Wario about that wasn't he skinnier and also blown into pieces in the previous time they have met, and he said that he regrown his body by using hippie power and he stated that he managed to drink about 30 Starbucks frappe every day.

Obese Hippie Wario challenged Luigi into feeding him about 20 meatballs (by sending them into pipes). Then, a giant meatball fell, and Luigi sent it to Obese Hippie Wario, who had then exploded. Luigi got the flying pizza after that moment, and Obese Hippie Wario (who is nothing but a head) told Luigi that there is a Dragon Ball at Colorado. Mario used the pizza to fly to Colorado, while taking down radioactive pigeons. Mario got to there, and then searched for the first dragon ball, while avoiding Kamikaze hippie skiers. Mario found the leader of the Kamikaze hippie skiers, who decided to fight against Mario since he stated that Mario killed many of his minions (although they actually self-destructed). The winner of the fight was Mario, who managed to do it by using explosives. He then got the first Dragon Ball.

Luigi flied to China with the flying pizza, and took down an army of Furbies on his way to there. He searched for the second Dragon Ball when arrived in there. While searching, Luigi shot green paint at evil brothers. After he found the Dragon Ball, he painted the Great Wall of China green and then left. Mario discovered that a Chinese hacker has the third Dragon Ball, which resulted in him uploading himself into a database with a computer, in order to find the Chinese hacker. When Mario found the hacker, he was challenged to do a few math problems. Mario managed to solve these math problems, and then he got the Dragon Ball from the Chinese hacker. Mario got out of the database and the computer exploded.