"Super MFGG War" is a modified version of the fangame "Super Mario War". In this, the player controls Mario (Or other characters depending on which 'skins' are placed in the skins folder) and has to 'stomp' the other players (Similar to how Mario stomps goombas in the original Mario 2D games). The original game was created by Flroian Hufsky and Two52, and was based on the original concept by Samuele Poletto. Super MFGG War replaces the default skins with those of MFGGers, has a completely new set of maps, new graphics and new music.

When Super Mario War was introduced to the members of MFGG in late 2005, it quickly became popular due to it being one of the only working Mario fighting games around. Also, as the graphics and music were customisable, it became a big hit, and many members began to put themselves into the game. Super Mario War also included a level editor, which added to the experience.

When the members of MFGG started to make playable characters, Black Squirrel had the idea to compile all the work, and form "Super MFGG War". The plan was to use all the homemade content content developed by members at MFGG, and release them as one download. A topic was made in the PPP, and it soon became quite popular, and eventually the first version of Super MFGG War was released, known as version 1.0. 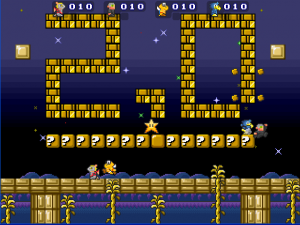 However, during the production of a second version, the Super Mario War fad died and was replaced by other fads. Many people had become bored of the game, and Super MFGG war was forgotten for a while. Occasionally, it would be bumped with a map or two, or just to see if another version was still being released, which was eventually the case.

Super Mario War later received an official upgrade from 1.6 to 1.7 Beta. This meant that more features could be implanted into Super MFGG war, at the expense of having to re-make all the levels to fit in. BS took up the challenge, and eventually Super MFGG War 2.0 was released on the 2nd July 2006.

Despite numerous requests afterwards to add more characters, Black Squirrel does not plan to release any more versions, however it is still just as easy to add your own characters as it was in the original game.

Unfortunately Super MFGG War became out-dated due to numerous revisions of Super Mario War 1.7, the most annoying one being a feature that easily allows you to add mods to the game. Whereas the majority of Super MFGG War is compatible with newer Super Mario Wars it still required a lot of editing to make everything work, and as such it was never optimized. It took until the 26th November 2007 when Elly posted a version compatible with SMW 1.7AFE.

Many people have contributed to Super MFGG War, although the biggest contributors are listed below:

There are also a few other MFGGers that have contributed with maps/skins/music etc.