Difference between revisions of "Sergeant Jinpen"

Sergeant Jinpen is an MFGGer who joined the Mario Fan Games Galaxy Forums on February 20th, 2002 during the vBulletin era. He has competed in many Sprite and Drawing Competitions.

Sergeant Jinpen has been permabanned on four separate occasions, all of which related to duplicate accounts. The first time he was banned was due to being caught making four different accounts. He was allowed back again when Marigi redeemed him. He was banned the second time when Salad overheard him confessing at least a dozen duplicate accounts over an AIM chat. He was also banned for slandering the administration, insulting various MFGGers, and attempting to steal the password of Zero_Hero789's account. He was surprisingly allowed back again, despite protests from several MFGGers, when he spent a whole year without causing trouble as "Riley Bungalow". He was banned the final time when he made several "Fairy" accounts of various royalty.

He was allowed once more when MFGG 3.0 launched. He hasn't been a very active member since then, but he occasionally posts his high-quality artwork in the Arts Board. He doesn't cause any problems nowadays. 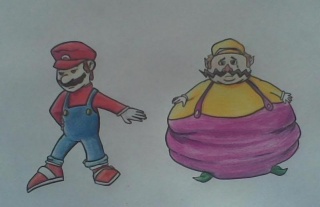 fat warios pls is a fad begun by Jinpen as iammario as his most popular quote in his early-ended life on the forums. It has eventually made its way into the colloquial dictionary of the entire community and is generally well-known by a member a few days after they have joined.