Not to be confused with Mario Starshine: Island Adventure.

Mario Starshine, sometimes known under the names Ultimate Mario or Mario Awesome, was an old Mario fangame under development by Draco.

The game was originally developed, as Ultimate Mario, in 2002 in Draco's first topic, and as yet, has never seen an actual demo released.

Ultimate Mario was shown on the ezBoard in 2002 alongside Draco's arrival. It was considered advanced for its time, but presented myriad horrendous errors, such as:

After its initial demo, Ultimate Mario's own complexity prevented it from being finished, as The Games Factory could not keep up (also Draco was horrible at organizing code.)

Mario Starshine was created from scratch, and not from the doomed Ultimate Mario engine. Although it was superior in many ways, it was eventually halted, due to the lack of programmer's commentary in the engine and The Games Factory's limitations. Before its inevitable descent into the abyss, it had quite a few (stable!) features:

Mario Awesome was the first incarnation to be developed in Multimedia Fusion.

It was eventually forgotten, because Draco did not know how to specify an exact jump height in pixels and generate a parabola for it (although he can do that now.)

This version contained full basic movement including swimming, as well as the Mushroom, Phantom Mushroom, Metal Mushroom, Fire Flower, and Ninja Robe ... but not the perfect jumping, and thus perfectionist Draco forgot all about it ... 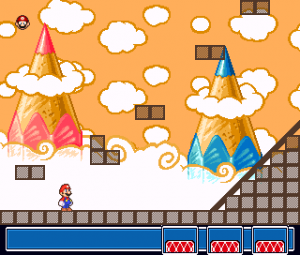 Super Mario Something-With-Cards was the tentative title for the effective fourth version of the game. Draco finally got the jump parabola thing to work and was very happy.

However, he tried to do something ambitious again, involving very complicated ways to code enemies so that one object could be placed, have a sprite put on it, and it would immediately become that individual enemy and act properly without any further modification. Although the enemies behaved properly, their sprites did not link properly, leading to frustration; this may be alleviated with XLua (although Lua is never known to "alleviate" anything.)

This game contained Ninjitsu Mario again with his usual abilities, but Mario does not have a Normal and Super form. This is the first version of the engine to exclude it.