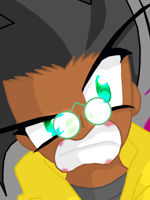 On the 30th of October 2008, Black Squirrel made Kitsune a Mod for the CCC and was the replacement of the former global moderator Risa Onda. As of April 2009, he was a Global Moderator for the MFGG forums. He was also an admin in the early days of MFGG 3.0, but eventually was stripped of his position in March 2010 after his departure. Now known as Fourside, Kitsune doesn't show up much these days, but is still technically a Comment Moderator.

At the advice of Rage and Sergeant Jinpen, Kitsune joined MFGG in late September of 2004 to present his fangame project at the time (Mario and Luigi: Superstar Saga 2) to the community. It never actually made it onto the site due to being an unfinished RPG demo. He has submitted some other small items to the site, all of which have made it onto the mainsite with some small level of accolade. His most well known projects are Mario Soccer (which has been slated for canning and or completion several times) and Luigi in...Koopa Kombat! (which received mixed reviews)

Kitsune has several finished, in-progress, and canned projects under his belt. Here are just a few.

Shortly after publishing RyuFox Legends, Kitsune decided it was time for a change. As he was now a published author, he needed an avatar character representative of his human self, hence the creation of Nicholas Ainsworth. Not long after, he was elected as one of two comment mods for the MFGG mainsite (the other being Tragic). He currently runs his own forum, Kannagi Stadium, which acts as a hub for his other two websites, Goshi-Dan's Arcade and the RyuFox Legends Website. This forum is no longer particularly active, however. He recently found a girlfriend as well, so projects revolving around her take up most of his time outside of school and his websites.

Despite school and issues at home being extremely problematic for him, he's still pushing forward on his art projects. RyuFox Legends Volume 2 is currently in production, as well as another soon-to-be-revealed literary project, a light novel.

Despite his name changes, many members still refer to him as Kitsune, as most of his impact on MFGG was made under that alias.