Not to be confused with Captain Jeff Silvers.

Jeff (previously known as YoManRulz) joined Mario Fan Games Galaxy on June 16th, 2009. After The Split, he lurks around both MFGG and Minus World. He mainly contributes by providing help with Game Maker or computer related problems. 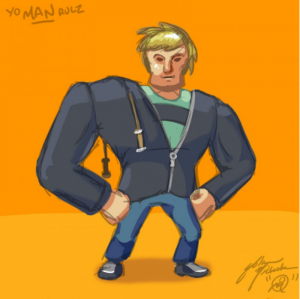 A Secret Santa gift by Bacteriophage

YoManRuLz was Jeff's first user name and character. YoMan, the character, is a lanky male human with messy yellow/blond hair, an open black jacket, a white shirt with a brown stripe, blue jeans, and brown shoes. It didn't seem original or creative, so he thought up Jeff. On March 18th, 2010, YoMan asked Char to change his name to Jeff (oblivious to the existence of Jeff Silvers), in hopes of shedding his n00bish internet beginning. His old name is still used on websites such as youtube, and the main site. 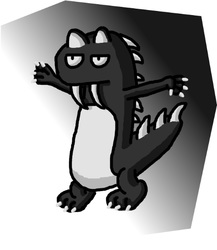 The original reference of Jeff

Jeff is a combination of a rodent and a cat. Key features are his black body, white belly, long saber teeth, and spines along his back and tail.

All of Jeff's fangames up to this point were entries in minigame competitions. He has two large, secret projects in the works; one involving Yoshis, and an indie game collaboration with an old MFGGer.

Between 2010 and 2012, Jeff was going through all of the main site fangames that did not have a score and reviewing them. However, after a computer upgrade, because most Game Maker games crash on Windows 8 this project ended abruptly. 12 games were reviewed this way.