GeneralGuy is an MFGGer who joined Mario Fan Games Galaxy and the IPB MFGG Forums on August 15th, 2006. He originally joined for the sole purpose of creating Mario fangames, but is only interested in the online community at this point. He is mostly active in the Pointless Post Palace and Wifi and Online Gaming sections of the message boards.

The origin of GeneralGuy's affiliation with fangaming dates back to sometime between October and November of 2005. At this time, he was completely new to the fangame community, and his very first game was an incomplete Super Mario Bros. fangame, which was made in a program called Platform Studio. During the summer of 2006, GeneralGuy was working tirelessly on a game made in RPG Maker 2000, a newly acquired tool. One of his unfinished pieces of work was a game called "Mario & Luigi: The Crystal-Star-Mountain", which used Mario & Luigi sprites. Although there were a variety of RPG2K resource websites on the Internet with publicly available sprite rips, there simply weren't enough to complete the game. After rummaging through several websites via affiliate links, GeneralGuy stumbled upon Mario Fan Games Galaxy one Tuesday afternoon on August 15th, 2006. He immediately found the sprites he was looking for, which were uploaded by NO Body. He immediately joined Mario Fan Games Galaxy and the Message Boards less than an hour later.

After GeneralGuy joined the MFGG Forums, he made several threads over the course of a couple months that consisted of uncompleted fangames, which were all cancelled. Sometime in October of 2006, GeneralGuy acquired The Games Factory, a far more standardized tool used by approximately half of MFGGers who made fangames; the other half using a different program called Game Maker. Eventually, GeneralGuy released a fangame called Paper Mario World 2 to the MFGG Main Site on November 2nd, 2006. For a short period of time, GeneralGuy was involved with designing the graphics in MFGG Ware. Around the beginning of June 2007, GeneralGuy bought The Games Factory 2. With this updated version of his previous game making program, he had far more options and features for creating fangames.

A few of the many fads and events that GeneralGuy was active in were mostly from 2006 to 2007, such as ITF we are muscular trapeze artists, the Pointless Supernova, A Day That Will Live in Infamy, Zombie Week, Team Wars and The Great Mistake.

On October 15th, 2007, GeneralGuy placed HTML code into his Signature that would embed the Numa Numa song into every topic he had ever posted in, including topics in the General Chat. This lasted for approximately 20 minutes before Joey and many other members took notice. GeneralGuy was then immediately banned from the PPP. However, the Pointless Post Palace would exist for only 30 more days before being permanently closed on November 14th, 2007 by Klobber. One week later on November 22nd, 2007, it was replaced by the Casual Conversation Castle.

The Dark Ages of MFGG for GeneralGuy began on August 8th, 2009 when the Administration created two topics in the News & Events forum titled End of the line (almost) and ATTN: New forum software, announcing that they would be abandoning the long-time Invision Forums in favor of the first phpBB forums. He knew that this would splinter the community at the very least, as many inactive MFGGers would probably think that the forums died and wouldn't bother registering on the new ones.

Day-to-day life on the new message boards started off inconspicuously, but quickly worsened when GeneralGuy realized how power-abusive the newly appointed Moderators were. They were suspending members for relatively trivial and petty things. Worse, the culture of the community seemed to be deteriorating rapidly, like a cancer spreading. Needless to say, GeneralGuy was caught in the crossfire, and a once jovial association with the MFGG Forums quickly turned unpleasant.

On March 9th, 2010, GeneralGuy (then known as Willy Wonka) reached a warn level of 100% on the first phpBB Forums and thus was automatically banned for one year. He swiftly contacted the administration via e-mail and raised his complaints about being unfairly punished, but his plead fell on deaf ears. 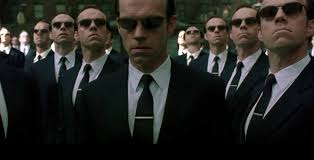 Agent Smith, a duplicate account created by GeneralGuy and a representation of the endless accounts he had created.

GeneralGuy was finally permabanned on March 12th, 2010, but that only made him create dupe accounts even more tirelessly. GeneralGuy was also banned from the MFGG IRC for plotting to raid MFGG. Despite being IP Banned from both places shortly after, this did little to stop him as GeneralGuy could register new accounts quickly and re-access both the IRC and forums using proxies.

Exactly one month later on April 9th, 2010, GeneralGuy made a dupe (which would become one of his more well known ones), and presented himself in a "I'm new" topic as General. Char decided to mess with him, so he changed his name to "moo", changed his signature and avatar to pictures of cows, made him a Fake Administrator, and gave him all available badges. Later, Char changed moo's member title to Greek Member.

GeneralGuy had made so many dupes to flood the forums with (approximately 100 or more in total) that the administration had to step in and mandate that all newly registered accounts be reviewed and verified individually by the administration before being allowed to post on the phpBB forums. It is believed that GeneralGuy holds the record for the most duplicate accounts on MFGG, followed closely by Sergeant Jinpen, who GeneralGuy viewed as a role model and source of his inspiration back in the day.

GeneralGuy's furious tirade finally ended on November 5th, 2010 with the announcement and events following The Split.

Miraculously, GeneralGuy was unbanned on the newly opened and second phpBB MFGG Forums after The Split, which he ended up joining on December 6th, 2010. However, he seldom posted on the new forums due to a lack of interest, and was for all intents and purposes an inactive MFGGer. Things would remain that way for almost eight years...

On August 15th, 2018 at 4:16 PM, exactly twelve years after first joining Mario Fan Games Galaxy, GeneralGuy registered on the new and current MyBB MFGG Forums. GeneralGuy has changed his behavior for the better, and is currently helping the community by recruiting old MFGGers (known as MFGG Homecoming), contributing to the MFGG Wiki, giving suggestions to the Site Staff on how to improve Mario Fan Games Galaxy, and more!