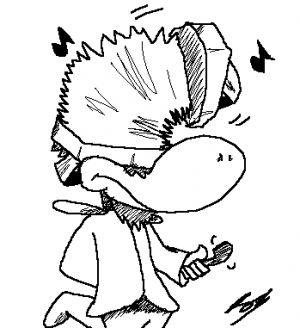 A Delccordion is any of a series of musical instruments similar and superior to the accordion, and comprised of a raft, shaft, and aft. These are played usually by applying a ridiculous amount of pressure to the raft, compressing the shaft and kicking the aft's ass to make some sort of atrocious racket. Their sounds range from a heavenly prelude to a satanic symphony of destruction.

Delccordions in general became popular in the year 2007 and have found their way into every crack and crevice of popular music ever since. Their popularity is not expected to die down for the next thousand years. 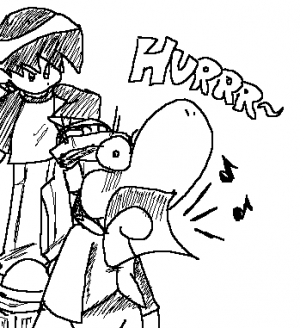 An advanced musical student demonstrating the use of a Capital Delccordion

A Capital Delccordion's raft is Delmore's hat, while the aft is his head. The shaft is nothing in particular but may be assumed to be Delmore's hair.

This type of Delccordion is played by applying and releasing pressure to the top of the raft, while pinching the ears of the aft at different areas and combinations to make different tones. This Delccordion sounds similar to a cat being neutered. Its range is from the sixth octave to the sixteenth octave, although this causes most of its notes to be too high for humans to hear. 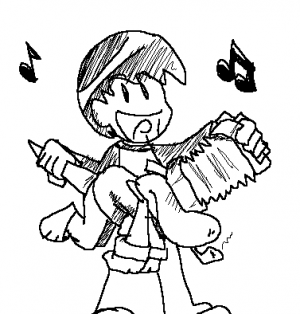 Capital Delccordions played a key role in the War of 20X12, where their earsplitting racket deafened enemy soldiers and allowed the Delmorians, wearing fluffy pink earmuffs, to approach them unheard. The Delmorians then silently, or perhaps not so silently -- hard to tell, assassinated their leader. The war later ended as the Loseer begged for a peace conference, and the war ended without any further bloodshed. The leader's body became a Looseccordion, but they lost popularity too quickly for any recognition.

As the war died down after the peace talks, Capital Delccordions soared in popularity in Delmoria, but not in Losee, where they were determined to be crafted by the devil. Capital Delccordions were then gathered and burned by churches like Harry Potter books, but some were secretly smuggled into the country and used to set off alarms as distractions for robbing banks and stuff. At this stage of the proceedings, the Loseer government banned Delccordions, but nobody gave a damn and continued to smuggle them in anyway.

An artist's rendition of a Grumpy Delccordion

A Grumpy Delccordion's raft is Delmore's entire head, while his body composes the shaft and his legs are the aft. Grumpy Delccordions are so named for their frustration as they topple over sideways from their ridiculous shape.

This type of Delccordion is played by lifting Delmore at either end and smashing his head and legs into each other over and over. After a period of playing, the Delccordion's music becomes toneless and wheezy, and it must be allowed to rest, unless played very slowly, in which case he falls asleep and stops playing. These Delccordions are somewhat larger and have much lower notes than other Delccordions. They are therefore often used in place of Satanic choirs, where their effect can be most appreciated.

An Octavius Delccordion in unique in that is hosts four shafts connected by four rafts which are all connected to the single aft, which is Delmore's back. The shaft and rafts, made of synthetic materials, must be pressed against the aft as with other Delccordions, each creating a unique tone. The end result is that only 4 types of sounds can be played, and it is very difficult to play in coordination.

For these reasons, the Octavius Delccordion is more popular for showcasing than for playing. Many coffee shops have them located in the corner, as well as diehard Delccordion fans.

Del-Rol-Le Delccordions have Delmore's head as the shaft and body as the raft just like a Grumpy Delccordion, but a tail as the aft instead of legs. This rare Delccordion weighs around 300 tons and eats all musicians who are foolish enough to try and play the beast. Legend has it that the only thing that is capable of working the Del-Rol-Le Delccordion is the ocean with it's mighty waves.

In the last decade, it has become more popular to fight the Del-Rol-Le. Many form groups and where weird space clothes, then head off on a single raft into the dank sewers where Del-Rol-Le's like to sleep. Members with projectiles like magic and fire arms are able to hit Del-Rol-Le's from afar, while sword users have to wait until the Del-Rol-Le dives onto the raft. There are concerns as to whether the event of hunting Del-Rol-Le's should be allowed, but it is generally agreed that it gives good items and meseta.

Known the be the most peaceful of Delccordions, the rare Armus Delccordion has no arms, but rather with the shaft at the shoulders and the aft at the hands. The Armus Delccordion has a very strange and large fear of water. Though very difficult to play, almost matching the difficulty of an Octavius Delccordion, there are a few tricks to it. One is to force the Armus onto a set of monkey bars that is over some sort of hazard, such as a bed of spikes or water. Then, either use some sort of loud noise to spook the Dellcordion into moving along the monkey bars, or put some sort of reward at the end. The result is very peaceful, almost soothing music.

A Phallus Delccordion playing a song on itself.

Though generally viewed as "peaceful giants", the Collosus Delccordion will most likely be very hostile towards everyone and everything, leaveing trails of destruction in there wake. The Collosus Delccordion's shaft is at the bottom of both legs, with the raft being makeshift feet. This makes them very easy to notice, and also makes them very clumsy, rarely being able to move 5 feet without stumbling over a curb, root, or piece of garbage. Luckily, due to many mysterious flat-faced related deaths, the Collosus Delcordion is somewhat rare, and even on the endangered spieces list. Taming a Collosus Delcordion, though a very tedious task, can result in the most wonderful and beautiful known sounds any Delcordion could possibly make.

This Delccordion was discovered 2,000 years ago, when a man was traveling though the desert of Soveryhappy. This Delcordion eats though it's accordion hair. This Delcordion once was able to turn people to stone by staring at them, but over time they have lost this ability. The Madusa Delcordion has six stomachs to go along with its six accordions on the top of its head, meaning it requires a lot of food. Because of this, it may be very hard to find a pet store that carries this type of Delcordion, although MikeL's Delcordions is frequently seen with at least one. This Delccordion is illegal in Kansas and New Mexico.

Rump Delccordions may fetch very high prices on Internet stores such as EBay or Delccordions.com, mainly because of the very different care and feeding compared to other species of Delccordion.

The Rump Delccordion mainly likes to feed on expensive foods, though rumor has it that it may be possible to train one to eat less expensive food. Though the price may be high, if you are intimate enough with it, even a beginner Delccordion player can make music that would make Bethoven cry. The only problem with this is that Rump Delccordions are EXTREMELY hard to become friendly with, mainly due to the grumpy and mean attitude they display, and the fact that each one has different favorites. If you were to feed it something that is not its favorite, playing it will never be possible, due to the fact that it will only allow its closest friend to play it.

Delccordions can be heard in songs such as:

Owners of a Delccordion must take good care of it, in order to keep it in tune.